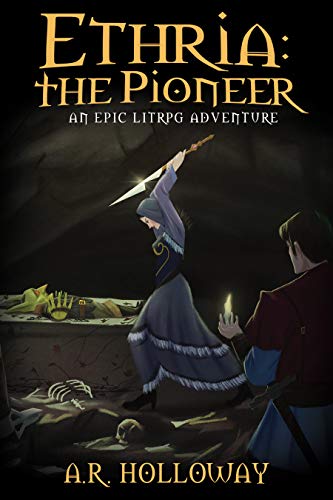 Offered a choice by powers far greater than himself between returning home at great risk, or entering a world named Ethria where he might find another, supposedly safer, path home, Daniel Rayid Tear will enter Ethria. A world that operates similar to the video games Daniel has always enjoyed, Ethria is a place where power can be found in many forms, both light and dark, and whose true purpose is unknown even to most of its denizens.

Taking the long way home, Daniel will make another choice, to help a group of persecuted people whose story mirrors that of his pioneer ancestors. But In a time when Gods are changing, the people of every race suffer, the foundations of nations shift, and change and danger are in the very air, what can one under-leveled, foreign wizard do?

All the while at the roof of the world, at the base of the Sawtooth Mountains a darkness grows, a creature plots, and an ancient evil from the foundations of the world seeks to re-emerge onto Ethria.